I Lied to My Kid and It Sucked. 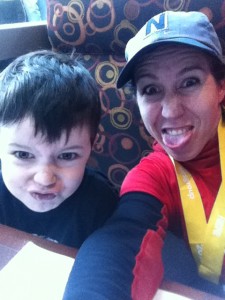 I heard a podcast this week between two famous life coaches , Debbie Ford and Cheryl Richardson, where they laughed about how ironic it is that the very issues they work around (fear, courage, self-sabotage) show up continuously in THEIR life as ‘beautiful teachers’… and I thought “Hmm, Ya. Funny.”

Until this morning, where I got SERVED by my own work through a wide-eyed 4 year old in his monster jammies.

You see, the last few weeks since Halloween (and even beyond, if I am REALLY being honest), I’ve watched certain behaviours surface, particularly around getting busy in the “doing”, straying with my food choices and meal planning and more specifically…. EATING MY KIDS CANDY.

Now it hasn’t been a lot. But a little everyday .  Just enough for me to notice and think to myself “Come on Keri-Anne, what are you doing?” but not enough for me to stop and back away from the candy bowl! So I’ve been simply brushing it off as no big deal but the truth is, I’m not okay with it because when I let go of the steering wheel, although it doesn’t affect me at first, later down the road it does – and I’ve worked too hard to go back to that chaotic and unhealthy place. Honestly, the candy is a symptom of a bigger issue which is I’ve been so busy “doing” that I’m not super checked-in with me and how I’m feeling these days.

So here’s what happened. Last night I ate the last piece of “good” Halloween candy my kid had. Meaning it had chocolate in it. I ate it and as I did, heard my awareness say “REALLY? He’s going to notice that one, Ker. What Are You Doing?” 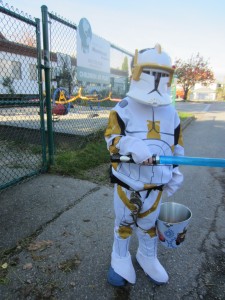 But no, I ignored it, ate the candy, put my two boys to bed and along with it, the day to begin again tomorrow. No big deal.

This morning as I’m cutting the crusts off D’s sandwich, he walks into the kitchen in his fuzzy monster jammies and blurts innocently “Hey, what happened to my chocolate spider ball Mom?”

I left the foil wrapper on the counter in plain sight and there he was holding it in his little hands waiting for an answer.

Without looking up (or thinking), I shrugged my shoulders and quickly tried to go back to making his lunch with “Ya, I found the wrapper from your Halloween candy and meant to throw it in the garbage. Can you put it in the bin for me?” And as the words left my mouth it was like I was watching the situation in slow motion and yelling inside my head “Oh my god, are you really doing this Keri-Anne? Are you really lying to him? You encourage people to be REAL with their shit girl!” I wanted to throw up.

The thing is, having held onto my own secrets in life and witnessed the lying of others along the way, I am super familiar with the impact bullshit has on a room. You know, where the air is suddenly sucked out only to be replaced by this heavy invisible elephant that everyone knows is there, but no one speaks of.  Where underneath the deafening silence you get a sense from those around you thinking “hmm.. that’s weird.  Something’s going on but I’m not sure what. And why isn’t anyone saying anything about it?”

Let’s just say I finally decided to look up and saw my son holding the same, spaced out look that people get when they are being lied to – with his head cocked to one side, a question mark on his face, wondering what was happening and knowing something wasn’t right about the situation. He knew he didn’t eat it and knew that it was in his candy box the day before. What killed me was, that whether he was conscious about it or not, he KNEW I was lying. There is an energy to bullshit and watching him try to compute what I had said, I saw myself as a child having to navigate and find my way around the various “fibs” I’d heard throughout my own life. I realized it was in some of those awkward moments where I learned to not speak up, to keep quiet and ‘be respectful’ to whoever it was that was lying because I didn’t want them to feel bad or to get into more trouble by making ‘a thing’ out of it.

Seeing this hit me like a sledgehammer and the shame that quickly poured over me was palpable and painful. Fuck No! I thought. I don’t want to teach him to tolerate bullshit.

It’s also no coincidence that the topic of telling the truth and getting caught ‘fibbing’ has been a major one in our house lately. We’ve been telling him to ‘never be afraid to tell us the truth, that his Dad and I will support and love him “no matter what” and that he can trust us through the impulse to hide things’ etc and to know he will be loved regardless. I want my kid to say “Hey, something doesn’t jive here” when he senses bullshit and to not stay quiet. I want him to be true to himself and speak up – no matter what.

The hypocrisy and irony was suffocating. Talk about a ‘shit got real’ moment.

When D ‘came too’ he shook his head and shrugged his shoulders as if to mimic me and just went on to take the trash to the bin like I asked. As he walked by me I took a deep breath and said “Wait.”

Not really knowing what I was going to say or how best to say it, I got down on my knees and looked at him in straight in the eyes and said half holding my breath, said “I just fibbed to you Denny.” (not even being able to say the word LIE… at least at that moment)

I was braced and ready for the worst, expecting an overly smug, self-righteous four year old response that personifies an epic Villain rubbing his wiry hands together saying “What did you do?! Bwahahahaha! Now it’s MY turn to get YOU in trouble lady! Victory is MINE!

But instead, he dropped his shoulders, his eyes softened and he looked at me with total serenity, sweet simplicity and compassion to ask “What’s the truth, Mom?”

Sitting on the floor, looking up at him (and trying not to cry from the shame and humiliation), I told him that I ate his candy and LIED about it. That I felt bad because it was his last piece of chocolate and didn’t want him to know I had done it. I told him I was sorry. I meant it and he knew it – more than he would ever know. It wasn’t really about the candy after all.

By the time I finished my confession, he seemed somehow relieved and appreciative because I think on some level in explaining what I’d done, I made sense of the confusion he’d experienced just moments before.

He threw his arms around me and hugged me tight. When he stood back with total delight he exclaimed “That’s okay Mom. I have a good idea. Next year, I will make sure that I get an extra one – for you – so you can have some, and for Dad and Beau too. That way we can all have some. K?”

And off he ran to play Lego, leaving me stunned on the kitchen floor and in awe of him and what just went down. What followed was me sharing this with another Mom, my husband and bawling my eyes out to get all the crappy feelings I had about it – OUT!  And to let it go. To let go of the shame and guilt and to hold myself gently knowing I had a choice to stuff the lie down or to say the truth and I chose the truth. I saved myself in that moment, hopefully taught my kid something along the way and loved myself through it. Holy hell, that was not a good time but in the bigger picture, worth every excruciating moment.

Which brings me to the learning, which is that:

So take this confession of a mom who is doing her best and loving herself through it; and do with it what you want. I am humbly going to spend the next few days to check-in, reconnect and get grounded with where I am and where I want to go from here…. and to be authentic in doing it.

I’m also fully prepared to see this epic topic play itself out in a variety of new and unrelated conversations by allowing him to see “behind the curtain” of parenting. What sweet hell have I now created…

With much love and gratitude for this crazy-ass ride,