A few weeks ago I took my first step of action for my ‘health plan’ by meeting with Lisa Carpenter, our local fitness and nutrition coach about her upcoming E.A.T! Program. I was pretty anxious to chat with her because I knew I was going to get a very sobering reality check on where I was at physically. I was going to get numbers on HOW BAD I’d let things get. Ugggh.

As soon as I sat down – tears. I felt embarrassed, humiliated, angry, frustrated and a bit lost as to HOW I was going to get back to a place where I could move without pain or difficulty and shed this fat-coat I’d built up over the last five years. More importantly I wanted to feel better about myself. I was stuck and didn’t realize that I was so down on myself. Although addressing all this was hard, I knew deep down it was necessary. Thank god Lisa was a very safe place to land as she knew and articulated EXACTLY what I was thinking and feeling when I couldn’t bare to say the words myself. She was extremely supportive through this and I felt it.

As we talked, the tears passed and together, we discover places in my life where I could make this mission of mine happen. Even if it was 30 minutes here or one set of exercises there. When I was really honest and looked at my days, I could find time EVERY day even if it meant run/walking at 8:30 at night after the kids were all settled. Then something changed in me. I began to feel the spark of possibility and heard myself think, I can do this.

What I loved about the process was that Lisa made it clear that she played a facilitator in this journey – giving me information and tools to make the decisions that support MY goal, not hers. I was choosing and doing. She wasn’t going to lose sleep if I didn’t do any of it. What? You mean you aren’t here to save me ? Or tell me what to do and then humiliate me when I’m bad? Oh, I would just have to report back to me, right. Well, that’s a revolutionary thought!

And with that realization, something clicked. For the first time I felt like I owned all of this and that made it easier somehow. We then measured, took photos – which of course I have not seen and may look at later (and possibly share) depending on how awesome I look in the now. But then she brought out the scale.

Now, this was a shock because I learned I’d actually gained weight since after having Beau four months ago. But… it was my starting point and I owned that too. I left there feeling very in tune with where I was and where I was headed. I found a peace in knowing I had taken the first course of action to move me forward and that felt very grounding. Good to the point where I wanted more action so I could feel even better. I WAS going to do this.

So what does it look like? Well, it means every night Scott and I carve out a time for the next day where we can each get time for ourselves, whether it’s for exercise or not. And so far, it’s worked. I am doing the Couch to 5K Program on my iPhone three times a week and fitting in some moderate exercises Lisa gave me wherever I can to get some semblance of core strength back as it is completely shot to shit.

And just so you know, it’s not as easy as it sounds. One day we all went out for a walk and our 3 year old, Denny, lost his ever-loving-mind when I tried to break off for one of my first run/walks. As he cranked it up several notches on the side of the road, I debated what my options were – to walk a slower pace with all of them and still say I got out? Or do what I did, which was grab his snotty, tear soaked hand and say “OK. LET’S DO THIS!” and started running anyway! I tried along the run to get him to ride in the stroller along side with Scott pushing but NO, he was just as determined as I was to get it done. LOL! And the ‘old’ me might have even gone to a shitty place thinking ‘Uggh this is NOT what I signed up for, dragging a toddler around with me’, but I was actually happy that I didn’t let it stop me. I was fighting for it every step of the way and even found a great headspace to do it. Because, how cool was it to be running with my D-Man?!! It was awesome and pretty funny at the same time. You should have heard him panting away saying “We ..almost.. there.. Mom?” haha. . And it was a double WIN because the little man slept like a champ when we got home too! 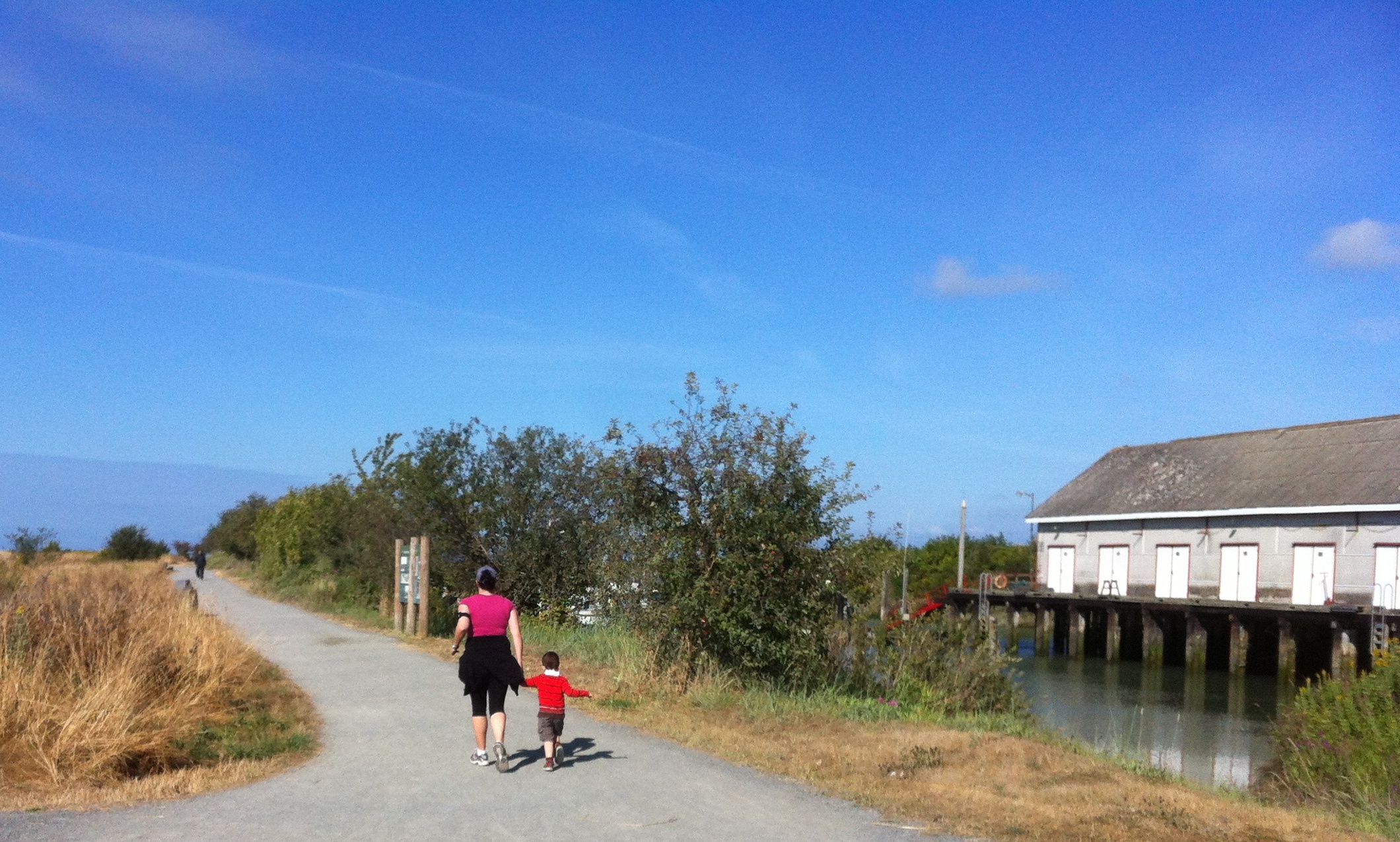 Denny running with me last week at Garry Point Park, Steveston, BC

So, do I have a goal? Yes… not to have freaking back cleavage. That, and if I were to settle on a number, I was 155 lbs when we got married (see ‘rockstar’ pic), so that’s roughly my first BIG goal… and not to sweat on relatively cool days. Running 5K consistently wouldn’t be bad either.

The best part so far is that even though I run like a turtle, I’m doing something and that negative self-talk? Gone. Because action has shut the little bugger up… for now.

Stay tuned for my next post on the first week of E.A.T! and the launch of my coaching career!